Comparison of Memory Map and VMS apps. Is the new comer any better than the established standard? 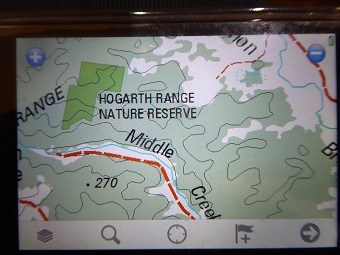 I purchased the Memory map app several years ago, its primary purpose being for bush walking and canoeing. It has in the main being quite good, it also came with a 2nd licence which I have never used, I have found the Hema in the car quite satisfactory in most circumstances, on the odd occasion when I have needed to look at the finer detail that the 25 & 50 K topographic maps supply, its been a simple case of sitting the Phone on the dash of the car next to the hema as a double check.
The problem with memory map is the cost of the map set, $100 Vic, $100 NSW etc. OK I can use that on multiple IOS devices, but that’s not important to me. (the Android/PC map sets have a different price structure) Not really needing the Vic 25K map set up to now I had put off its purchase. 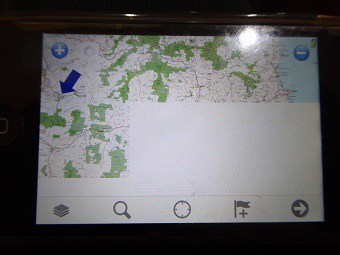 Talking to our TJM Bendigo they mentioned that VMS had put out an app with Vic, NSW & QLD mapsets included for $100.

Mud map also had released their MudMap3, which seemed to be a similar system for a similar price. After a bit of research of on line reviews, and my personal experience  with mudmap2 (Complete waste of money) I decided that it was either VMS or stick with memory map.
I bought the VMS app.

I had a chance to try out the new toy when we went over to the Riverland, which was fortuitously right on the edge of the supplied maps, and then returned via Murry Sunset park.  Allowing the overlap of maps past the border is a nice touch as memory map cuts you off right at the border. 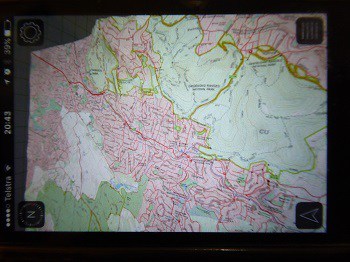 How are they to use?
Both programs require you to down load maps before going into an area, downloading all maps would be possible, but take up a lot of phone memory, and would take a lot of effort on your part, both these programs are primarily designed to give you detailed maps in a confined area you choose. I notice that the VMS uses a lot more storage space than Memory Map.
Both can down load on the fly if you have phone range. 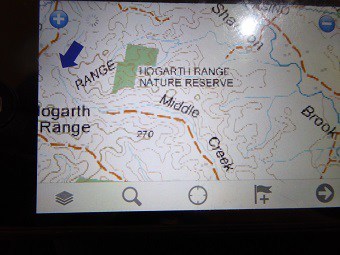 Download requires you to display the whole area you are going to be in  at full resolution, once it displays on the screen the map parts are stored in the phone. There are instructions for bulk download, but I’ve not had it successfully work. If you have phone range it just seamlessly keeps down loading the map. The program is clever in that the map comes in at low resolution and keeps improving as data comes in. Once travelling we can see exactly were we are, speed, and leave  a trail log. Memory map has a good  on line help file. Memory map has gone to the expense of blending all maps into one continuous map, hence the format and appearance are consistent 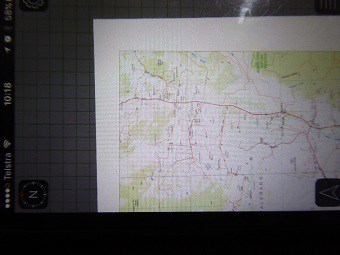 VMS maps even show borders like the real map 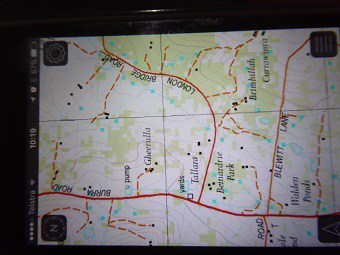 VMS display is a representation of the paper map

The map set is at least partially a set of maps that have been scanned, you can tell this by the odd stain or bit of writing you come across. Download is one map at a time , and if you are still at home its really hard to figure out what maps are required, I contacted VMS who sent me a Victorian index map on PDF which has made the job a lot easier. Once in an area  additional maps don’t download automatically, so you need to list “maps at this point” and pick the map you want, this works fine if you have phone range, the maps in Victoria are less than 10MEG each, however in Queensland the maps are full colour satellite, and are 600MEG each.  Like the MM no phone range and the wrong map means no high definition map. Using The VMS is like having a pocket full of maps and each time you go off the edge of a map you need to manually bring up the next map to continue. A nice feature is the place names on the 250K base map scale with the zoom level. And of course once travelling we can see exactly were we are, speed, and leave  a trail log. It has a 3D option, which is best turned off in flat country as it distorts the grid, in hilly country it is spectacular, and really gives a good representation of the terrain. It has a help file button, however this is very basic,  and the user guide says “watch this space” 🙁

Both apps are using the same or similar map source. Memory map costs 3 times as much to do the eastern states, against that it has the option to put the maps on a second device. Memory map is seamless, VMS a map at a time, and has 3D option. Both are “easy” to use once you get used to them. Both are stable and don’t crash.  For our purposes, ie low speed local stuff when walking or canoeing we have found both excellent.
I have found my iPhone 4 an excellent navigator, it will run all day with the GPS on before the battery gives up, I have a small recharge kit which then further extends this time. For safety’s sake a good old fashioned paper map and compass is a good idea, often our back up map is a photo on our camera (not phone) of the info board at the entrance to the national park.
Conclusion: Either does the job,  it depends on  your budget, which areas you want to go into and if you want a seamless display or are happy to work with digitised “real” maps.