We had been coming to Bribie Island since the 1980’s and had never thought of the northern part of the Island as any more than an Mosquito Infested Scrub. What we found was very different.

Bribie island is a sand island just north of Brisbane and unlike other islands in the area is easy access via the bridge. The bottom third of the island is residential, and the rest is national park. 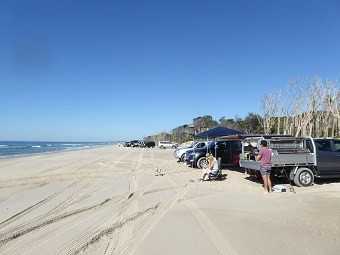 Saturday was a crowd on the beach

Access  is via the beach, and the road in is sand and real rough, being so easy access the traffic pressure is huge.  Once on the beach if it’s the weekend you will find you have plenty of company and the sand is cut up real bad and quite mushy from the constant traffic. Towing our AVan camper was fine along the beach, after 20km the beach was still cut up from the traffic and people and 4×4’s every where. Popular spot all right. 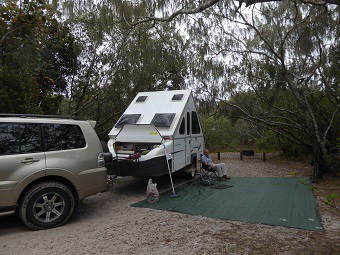 Campsite was shady and pleasant

We camped on the ocean beach campsite, it’s a series of campsites along the beach, with a toilet block about in the centre (nice and clean). Getting into the camp with the trailer on behind was challenging, having got stuck doing a U turn when I missed the camp, getting up the beach through the deep chopped up soft sand was just not going to happen.  One of the things about plenty of 4X4’s on the beach is there are lots of people who just want to help, and a quick snatch and we were up and into the camp. 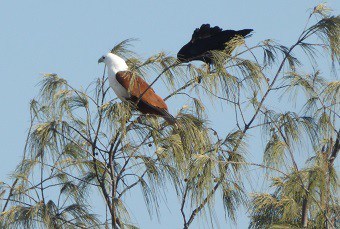 Sea Eagles Patrol the Beach, but the Crows don’t let them have it all their own way

Camp was on the first dune and had a view of the sea, amongst sheoaks, meleuaks, etc. A lance monitor turned up pretty quickly to make sure no food was left around, and the bush turkeys paid regular visits in the hope of a few scraps. A majic spot with sea eagles patrolling the beach and crows hassling them . As the crowds disappeared down the beach peace returned and we could enjoy a real magic spot as the sea washed away the evidence of the 100’s of 4X4’s.  Kangaroos Came out to feed on something that washed up on the beach. 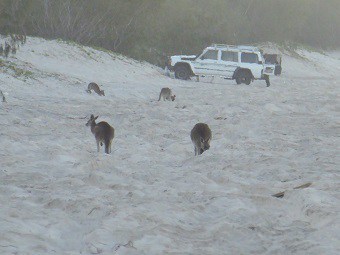 Kangaroos feeding on the Beach

As the crowds disappeared down the beach peace returned and we could enjoy a real magic spot as the sea washed away the evidence of the 100’s of 4X4’s.  Kangaroos Came out to feed on something that washed up on the beach.

Sunday morning and I went for a jog up the beach, just my footprints and a couple of sets of tyre tracks, serene. An hour later the crowds are back. 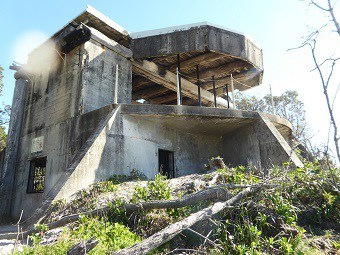 We join the traffic and head to the WW2 bunkers, the reminder of another time is stark with the rusting, crumpling concrete contrasting to the pristine natural environment. 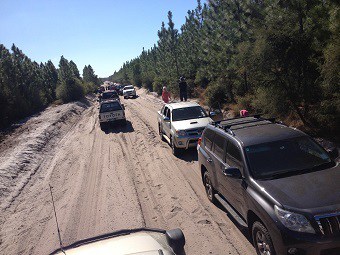 Get Bogged and expect lots of help

We then head inland on the centre track, it’s a sand road, and leads to a lovely picnic spot on pumice-stone passage, the birds are out in force and we get some nice wildlife shots. Further down the road we come across someone stuck at the side of the road, we take little notice. Fifteen minutes later when we come back there is a crowd of 20 cars “rescuing” him. Bit of a circus really.  Back to camp, the crowds disappear, and we are left in serenity again. 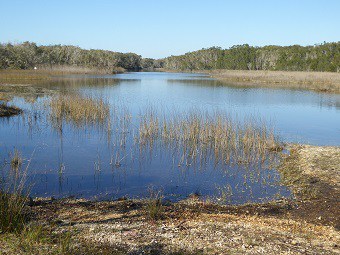 The Lagoons were a real Suprise

Monday morning and just a few other campers, and we can enjoy the real peace of the park. Today’s excursion is to the lagoons. The lagoons prove to be a big surprise, truly beautiful and tiny birds every where, the sound in the bush is quite surreal. In the lagoons mullet are jumping out of the water and its so clear we can see them swimming around. 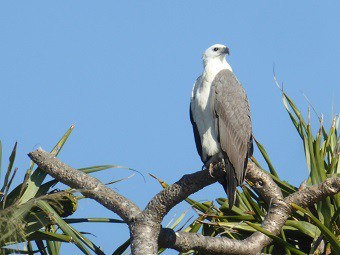 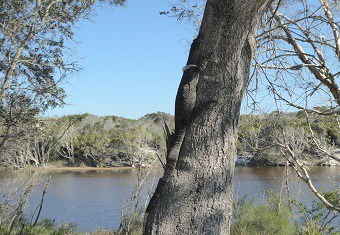 The down side is some people are just disgusting, behind the sandhills is scattered in toilet paper. Given the tourist pressure the only real solution is  many more toilets along the beach. No matter how many educated caring people visit, there will always be a small percentage that don’t care, and with thousands of people each weekend the problem of waste has to arise. A lance monitor went by, this one wearing a plastic bag for a t-shirt. 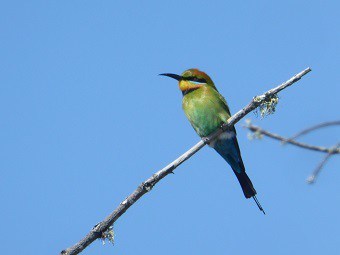 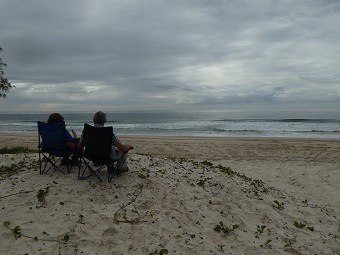 A Quiet evening without the crowds

We passed up the temptation to drive into Woorum for an icecream and headed back to camp, almost by ourselves, even without being churned up we found the sand soft to drive on as the tide came in, and were pleased we weren’t towing on the rising tide. As we approached camp we could see the Sea Eagles and Crows still squabbling over the territory, and stopped for a while to watch. 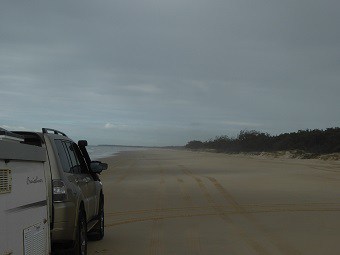 Next morning we headed back to civilisation, with the memory of a very magic spot that had surprised us with its proximity and quality.